The Euro made a significant recovery against the US dollar last week, adding more than 200 points and there may be further gains in the days ahead if the US Federal Reserve on Wednesday delivers a rate hike less than expected and all remains positive regarding data from the Euro zone.

Europe’s single currency received a late lift on Friday after S&P Global PMI survey suggested the all-important U.S. services sector may have fallen even faster than in Europe’s manufacturing sector during July.

This saw the EUR/USD rate recover above the 1.02 mark ahead of the weekend and in price action that was indicative of investors pondering the idea that the European economy may not be lagging behind its US counterpart as much as first thought.

For many however, this scenario is a tough pill to swallow and with recession risks hanging over the European continent, the chances of the Euro reversing its current rally remain high.

“In view of recession risks, Italy’s collapsed government and a very strong USD, the ECB has a lot of cards stacked against it,” says Jane Foley, head of FX strategy at Rabobank.

“We have revised down our EUR/USD forecasts and see risk that the exchange rate could drop as low as 0.95 over the summer months. We expect broad-based USD strength to ebb early next year allowing EUR/USD to recover to the 1.05 area on a 6 month view,” she added. 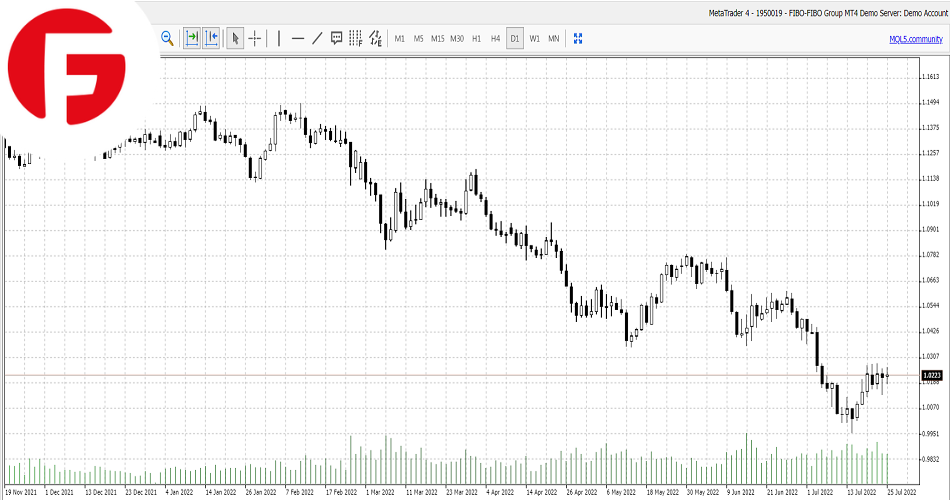 Looking ahead tomorrow, the main drivers of the EUR/USD currency pair will be the release of key real estate data from the US such as the housing price index and new home sales figures which have shown some weakness of late as higher interest rates start to take their toll on the American economy.

We will also see consumer confidence figures from the US hit the market but how much volatility will be created in the EUR/USD pair with the news above remains to be seen and it is possible that many traders will sit on the sidelines to wait for the interest rate decision on Wednesday from the Fed and whether they will be aggressive and deliver a 100-basis point rate hike.