The Euro has managed to push back above the $1.1300 level against the UIS dollar as we enter today’s European trading session after falling to its lowest level since July 2020 which was caused by a pullback in the US Treasury yields which weighed on the greenback and economic data which brought no big surprises to the market.

From the Eurozone, inflation for October rose by 4.1% on a yearly basis which was exactly in line with expectations while the monthly reading, hit the market at at 0.8%, also in line with estimations and the EUR/USD currency pair barely budged at the news.

Looking ahead today, market participants will pay attention to data from the US starting with the Initial Jobless Claims figure which is expected to ease from 267K to 260K and will be followed by the Philadelphia Fed Manufacturing Survey for November which is expected to come in at 24 slightly lower than last month’s figure of 23.8

The major news of the day will be comments by ECB and US federal Reserve policymakers as the divergence between the two central bank’s next moves regarding monetary policy are stating to diverge quite a bit and especially towards interest rate hikes. 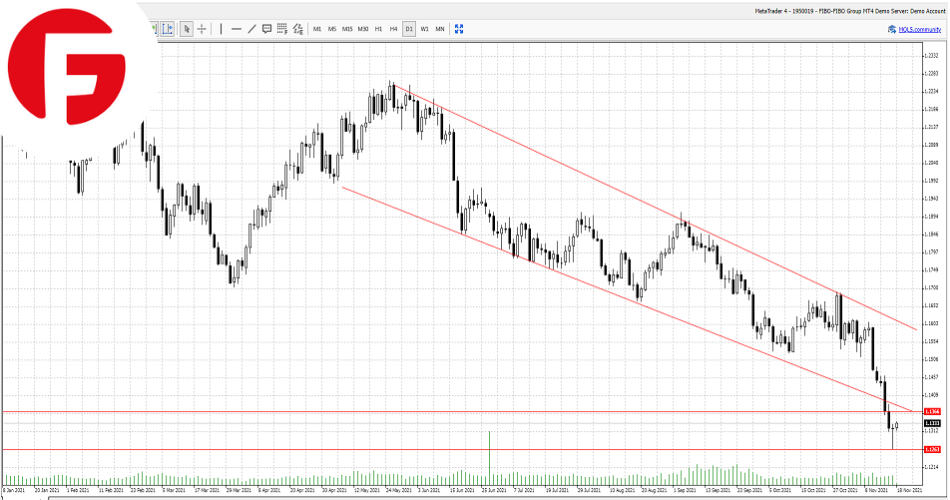 As we can see on the chart, the EUR/USD currency pair found solid support in yesterday’s trading session at the $1.1263 mark and was able to push all the way back up to $1.1318 before the close of trade and finish just slightly in negative territory.

In today’s session the rally has continued, and the price remains above the important psychological level of $1.1300 and the currency pair is currently sitting at $1.1336, and the market awaits the economic news and monetary speeches.

This relief rally was probably expected after the losses the Euro suffered against the US dollar over the past week but on the surface, it looks like a dead cat bounce and the Euro is likely to face strong selling pressure at the $1.1366 resistance level as investors fret over potential higher rates in the US which will keep the greenback well bid on the back of higher yields.